Cliburn Station and Wood are owned by Gavin and Wendy Matier. 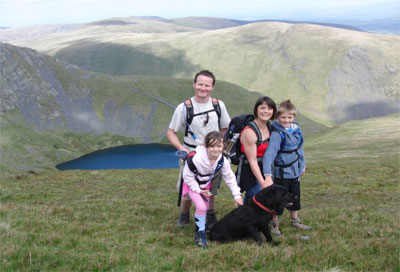 We moved into the property on 1st October 2004, having decided to leave city life behind in search of a more peaceful and fulfilling life for both ourselves and our two children, Elliott and Jasmine.

Gavin was born in Northern Ireland and left Limavady in 1987 to study at Bradford University. There he qualified as a Pharmacist in 1991 and now works as a pharmacist at the Penrith Consortium Health Centre Pharmacy and as a locum pharmacist.

Wendy was born in Tyldesley, Manchester and left in 1989 to study at Bradford University. There she qualified as a Pharmacist in 1994 and now works as a pharmacist at Green Tree Pharmacy, in Kirkby Stephen and as a locum pharmacist.

Whilst working in Leeds, we met in 1992 and married 25th August 1996. In July 1999 Elliott was born and in February 2002 Jasmine was born. It was at this point we decided to leave the city behind and after thoughts of moving abroad, we decided to move to Cliburn, Penrith in 2004.